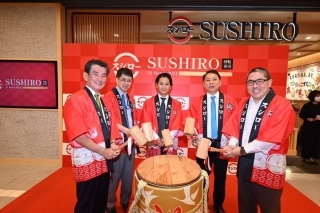 On March 31, Mr. Hiroshi Kawamura, Deputy Chief of Mission of the Embassy of Japan in Thailand, attended the opening ceremony of the first Sushiro restaurant in Bangkok (second from the left in the photo). The opening ceremony of Sushiro, which boasts the largest-scale number of seats in the world, was held in a spectacular manner, with many customers waiting in long lines before the opening of the restaurant.

Mr. Kawamura, Deputy Chief of Mission of the Embassy of Japan, who became the first guest, enjoyed Sushi and said, “This is exactly Japanese quality. I am also happy that the touch panel will bring sushi to customers immediately in a dedicated lane. Fresh Sushi is always served as it is disposed of automatically after being turned around over 350 metres. There is also a variety of Side menus such as ramen and desserts, making it easy for families to use the restaurant. Being able to Make a table reservation with the app is also convenient.

Some Thai media wrongly reported that, "H.E. Mr. Kazuya Nashida, Ambassador of Japan in Thailand, attended the opening ceremony." However, the attendee from the Embassy of Japan was Mr. Kawamura, Deputy Chief of Mission, and the article has already been deleted. In addition, Mr. Kawamura had no close contact with the Ambassador, and he tested negative for COVID-19 after he took a PCR test. The embassy staff who accompanied Mr. Kawamura for the opening ceremony also confirmed to be negative by the PCR test.

The false media article mentioned above has caused a great deal of reputation damage to Sushiro, and the article is completely groundless. The Embassy of Japan in Thailand sincerely hopes that many people will not be confused by this kind of false information and will enjoy Sushiro's delicious sushi and dishes.