Handover Ceremony of COVID-19 Vaccines from Japan to Thailand 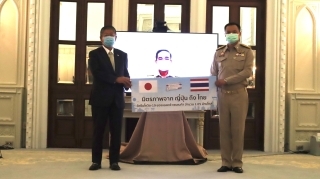 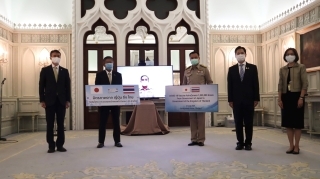 On 12 July, at the Government House, Bangkok, with the attendance of H.E. Mr. Prayut Chan-o-cha, Prime Minister and Minister of Defense of the Kingdom of Thailand, H.E. Mr. Anutin Charnvirakul, Deputy Prime Minister and Minister of Public Health, and Mr. NASHIDA Kazuya, Ambassador of Japan to Thailand, the handover ceremony took place of about 1.05 million doses of AstraZeneca vaccine donated to Thailand by Japan.

“Japan donates COVID-19 vaccine to Thailand. Our two countries have helped each other and deepened ties in times of crisis, such as when the Great East Japan Earthquake and the massive floods in Thailand occurred in 2011. I believe that Japan and Thailand will also work hand in hand to overcome the current severe difficulties caused by the COVID-19 pandemic.”

Ambassador Nashida went on to expand his remarks and expressed his hope that the vaccine donated by Japan would be of help for the Thai Government’s vaccination program so that Thai people as well as foreign nationals including Japanese could get vaccinated in a smooth and timely fashion. Ambassador Nashida also explained that Japan’s support for Thailand in the fight against COVID-19 includes not only the donation of vaccine but also the provision of cold chain equipment needed for vaccine transportation and storage, as well as support for facilities and equipment for strengthening diagnosis and treatment and vaccine development. Ambassador Nashida concluded his remarks by expressing the hope that Japan and Thailand would overcome the COVID-19 crisis together and that both Thai and Japanese people could soon visit each other's countries again with happy smiles.

2. In response, Prime Minister Prayut via videoconference extended his gratitude for the donation of vaccines by the Government of Japan and for the kindness and consideration of Japan on behalf of the Government and People of Thailand, and said that Thailand has been always moved by the friendship expressed by Japan. Prime Minister also said that the Thai Government has been making utmost efforts to procure vaccines in order to have all the people living in Thailand get vaccinated to produce immunity, and expressed his expectation that Japan’s assistance would play an important role for Thailand to advance strongly by complementing vaccines already procured by the Thai Government, improving people’s access to vaccines, decreasing the infection rate and fatalities, improving the health and medical capacity, and bringing economic recovery and social development. Prime Minister concluded his speech by saying that Thailand and Japan have enjoyed close relations and Thailand would get over the current crisis with Japan.

3. At the end of the ceremony, the message from Prime Minister SUGA to Prime Minister Prayut and a panel representing friendship between Japan and Thailand were handed over by Ambassador Nashida to Deputy Prime Minister Anutin.